We woke up with the sun and went about our business of packing up the tent (we packed up the rest of the camp the night before in case of a rain storm and needing to make moves out of the rive bed in a hurry…) We had a bit of a leisurely breakfast and set out again after covering our tracks at the campsite and filling in our braai pit so we didn’t spoil the wilderness for the next people driving through.

I hadn’t mentioned in the last post that as it was getting dark we could no longer find the way to continue up the Ugab river and assumed we would have more luck in the morning. We didn’t. The tracks just seemed to end no matter which way we tried. We tried and tried again, almost getting ourselves stuck. Still no way to go. 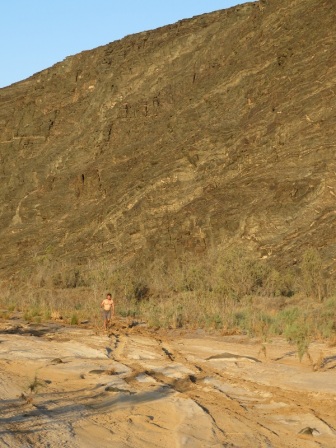 It turns out this was the correct way to go. Someone had tried to go that way and had a really bad day a few days before. Impossible to pass.

Plan B was to backtrack all the way back down the river and take an exit out to a well-graded road up and around the river to the Rhino Camp. As this was our only option (besides back tracking all the way to the main road) we took it. A few hours of driving through river bed (we didn’t get stuck this time) up craggy hills and through Mars-like landscape and we arrived at the Rhino Trust campsite.

Driving out of the riverbed from the night before we realized it was questionable whether we were actually allowed to stay there. No one said anything though so we assume it was fine. (It may be because we saw no one but still.)

We decided not to stay but made some pleasantries to find out about the roads north. All clear. Though there’s no way we were making it to Palmwag, they said. They were right.

We drove through steep canyons and out into an incredible desert where we spent almost the entire afternoon. The scenery was stunning. A lot of it also looked very similar and it was tough to tell where you were going.  At one point we found ourselves getting turned around but luckily Cheryl quickly noticed (after 15 minutes – mind you, I hadn’t noticed anything amiss) that the sun was on the wrong side of the car and we turned around again to correct our mistake.

Looking out across the desert.  No flowing sand dunes here. The colors varied but mostly a red dirt-like material.  And lots of dust.  Lots and lots of dust.

One of the welwitschia plants for which the area is famous

As the sun was getting low the desert gave way to the Huab river (again mostly a dry river bed) and we descended into the valley. It was some of the most beautiful landscapes either of us have ever seen. There was no doubt in either of our minds: we would be camping down there for the night. 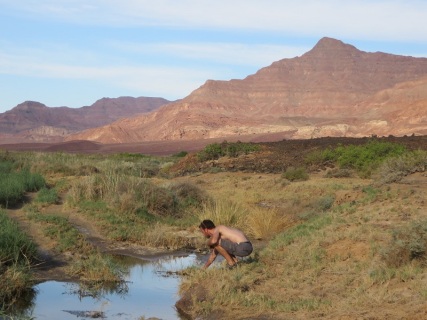 Checking to make sure this water was driveable.  It got quite deep in the track but we decided we could do it.  Fiona had no trouble but it did make our hearts race when we dropped in and it was deeper then we thought.  Doesn’t look like it but it went up almost to the hood! Also shows the great contrast between down by the river bed and the desert beyond that we had been driving through all day.

When the road to the Huab River look-out point wasn’t passable we decided to set up camp on some high ground just above a reed-filled area. Our mistake was that we were right next to a bush which blocked our view to one side. Naturally, as the sun dipped behind the mountains and the moon came out, so did the lion grunting: coming from the direction behind the bush.

“It’s far away” I assured Cheryl.

“Maybe let’s move the fire closer to the car.” I offered. We did.  We dug a new braai pit and picked up the fire with a shovel to move closer.  The next couple of hours were spent listening and watching before going to bed. No cats in sight. Though we heard them throughout the night. 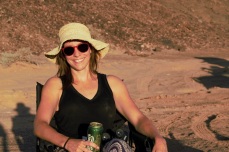 In and around our campsite for the evening.  The scenery was absolutely stunning.  We could have stayed there for days!

The next morning as we were packing up I heard more grunting. This time from the other direction. It sounded very close. Very, very close. I called out to Cheryl to listen with me. Nothing. Was I just hearing things?

We finished packing and as we were driving out from our campsite, just around on the other side of a koppie (small hill) we found the tracks. Two sets of very clear cat tracks. Maybe 40 meters from camp.

We tracked them for a while but couldn’t spot them. Bummer.

Cat tracks near camp.  The close-up is of a smaller set, not the ones from the road.  We drove down that track on the left but never found the lions.

You may be thinking: “This is nothing new, you had 13 lions in your campsite in Mana Pools!” and you’d be quite right. The big difference here is that we weren’t in a protected area. This wasn’t a national park. This was truly out in the wild. Desert (adapted) lion are quite rare so it would have been an amazing sighting to have seen them out in the open at our camp. Let alone anywhere in the riverbeds.

One last picture, just for fun.

Our directions for today read like something out of a fantasy novel:

(These are literally the directions)

Drive 70km up the river bed and try not to get stuck by any of the treacherous obstacles: deep sand, mud flats, sharp rocks which can shred tires, to name just a few.

Oh, also try not to get eaten by a desert lion, trampled by a desert elephant or gorged by a desert rhino (While in the riverbed our GPS literally said: take a right turn onto “Elephants”)

We were only able to leave Swakopmund just after 11AM. Our errands took longer than expected but we made north with haste up the Great Salt Road along the coast. Yes, salt road. Namibia is world-renowned for its unpaved roads and this one is a beauty. It is made out of a mixture of salt and dirt, forming a smooth, hardy surface which almost appears tar-like at times. We’d been warned that although it seems great, it can get slippery when it was wet and foggy out. It was wet and foggy today. We didn’t test the limits of its traction. 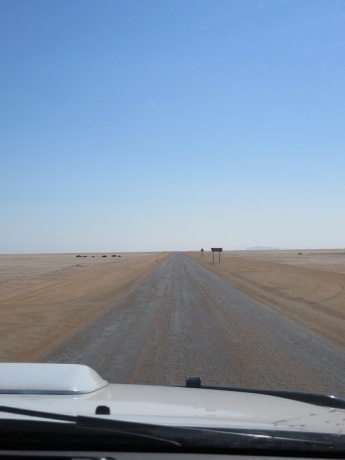 The road looks like tar but it’s actually salt and dirt.

Following the rest of our directions we got past St. Nowhere without issue but that’s just about the only thing we did right. We drove right past the Ugab river and got to the Skeleton Coast so we turned around. We turned down a road that was in relatively good condition and thought “We’ll get to Save the Rhino Trust Campsite in no time!” We were wrong.

Our first road was easy to drive but the landscape was spectacular.  It looked like we were driving on the moon!

We turned off the road down a steep embankment into the riverbed. It was mostly dry but for the odd muddy bit. Not too many people had come this way but there were clear tracks to follow so we charged forward fearlessly (though with a bit of tingly nerves for good measure.)

The riverbed started out smoothly and I proudly proclaimed to Cheryl “we’ve only got to average 20km / hour and we’ll make it to camp before sunset. We’re golden!”

We were not golden.

We did not average 20km per hour.

We got stuck. After 5 attempts and 45 minutes we extracted ourselves.

We got stuck again. (This time we got out our first try, mostly because we listened to Cheryl’s advice.)

The first time we got stuck.  You can tell it’s the first time because I’ve got a big smile on my face.  All part of the adventure right? 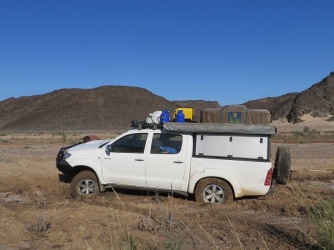 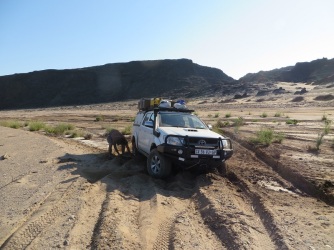 Still stuck.  Less smiling.  We did eventually get out and continue on our way.  Then the smiles came back big time.

We were still 30+kms from the camp when the light was starting to fade. Instead of pushing on we stopped at a relatively flat spot on somewhat high ground and set up camp. That’s the beauty about having everything you need with you at all times.

We lit a fire, cooked some delicious chicken a la Sweet Baby Ray over an open fire and settled in for a relaxing evening trying desperately to follow the rest of the directions about not getting eaten, trampled or gorged.

Our camp set-up that night.  Nobody around in any direction.  It is the best part about driving around with everything you need with you all the time.  Just set up and you’ve got your own piece of paradise.

Luckily, we were able to follow those and we had a great night to ourselves. We think the closest people to us were around 35km away. That said, we also realized that meant absolutely nobody knew where we were so we decided to send a quick SMS via our sat phone to Cheryl’s dad so somebody knew where to start the search party in case things turned out poorly.

They didn’t turn out poorly. It was awesome!