We were up and out of our campsite before dawn on our last morning in Ihaha, Chobe. We had one heck of a day ahead of us. One last drive along the river front to get to the park gate and on to the boarder yielded no final hurrah in terms of animal sightings. In fact, we saw barely anything moving for the first 30 minutes until a heard of giraffe and kudu came to bid us adieu.

Once we hit the tar road we were all business. Through the park gate and the nearby Ngoma boarder post we were cruising at 120kph back toward Katima Mulilo with high hopes that the spare parts we had ordered had arrived on time and that the mechanic remembered we were arriving to get them installed. With all fingers and toes crossed we nervously pulled into the local Midas. Sure enough our leaf springs and bush kits had arrived and were out and ready for us to have them loaded into our car. As we pulled around the corner to the mechanic he too was ready with extra guys on hand to install them as quickly as possible (still to take ~3 – 4 hours.)

All going according to plan.

Cheryl and I headed to a coffee shop / restaurant to do some final things on the internet, eat some breakfast. (Actually we had already had breakfast in the car so at 10am I ordered a chicken burger. A bit odd given the hour but definitely delicious.) We had meant to finish up with enough time to do our food shopping (only buying non-perishables because we weren’t sure what could be taken across the border into Zambia.) but to our surprise Fiona was out of surgery with beautiful new leaf springs installed before we left the restaurant.

We are on schedule.

We split up (Cheryl to start shopping, Josh to go to the bank and pick up the pick-up) before coming back together for a couple of more errands (fill up with diesel, buy some stools so everyone has a place to sit when my parents join us) and headed out.

The crossing into Zambia took much longer than necessary thanks to an American couple in front of us in line who were in anything but a hurry. 6 lines and 5 payments later we entered into Zambia having spent significantly more on border fees then we had expected. Time to hit the road again.

It is 3pm. We are a bit behind schedule but still ok.

As we pulled out of the border something happened that we hadn’t anticipated. The road was horrible. We expected them to be bad but this was a whole new level. How can you even consider this a road?

Our average speed for the past hour was 20kph. How do you even call this a ‘tar’ road? We had been warned that a part of the road some 400kms away from us was “very bad.” If that means this wasn’t “very bad” we would be driving all night.

Luckily the roads cleared up considerably once we got passed Livingstone and were on our way. We drove well into the night despite the many warnings against doing so and only had to slow down at the “very bad” section we had been warned about. Though it still felt like a highway as we could easily avoid the potholes at 90kph.

We finally made it to Lusaka just before 1AM and then embarked on the mission of finding the Air BnB that we had booked. Mom and Dad had been picked up by the local driver who knew the place so they made it without issue. (Good thing too because we were still a few hundred kms away when their plan landed.) Unfortunately for the owner we didn’t know the place and they were woken up with a phone call from two lost customers in the middle of the night.

We pulled into the driveway around 1:30 and Fiona’s purring engine woke my parents so they came outside and greeted us with lots of hugs and kisses.

From the Kunene River Lodge we took a loooooong drive across northern Namibia, stopping for a night back in Rundu for yet another alignment and to spend the night on our way to our next destination. Even though the drive was long it was uneventful and we got to Rundu with plenty of time to spare before the shops closed on the Friday afternoon.

After Rundu it was a relatively short drive the next day to Ngepi Lodge in the Zambezi strip. (The Zambezi strip is the pan handle that comes out of the north-east of Namibia. It used to be called the Caprivi strip but for some reason the government decided to change it a few years ago. I think it was mostly to confuse tourists and because someone had a bone to pick with a cartographer. This of course backfired as they now sold many more maps with the updated name.)

Anyway, back to Ngepi. Ngepi is a quirky lodge famous for its bathrooms (yes, you read that right) and its tree houses along the Okavango river. This was the place Cheryl and I had decided to spoil ourselves and we rented a treehouse that literally sat over the river. It was an open-air room and we woke up each morning to the sunrise gleaming in our eyes from across the river. We really enjoyed the lodge for both its quirkiness and the luxurious feeling of sleeping in a comfortable, plush bed with big, fluffy pillows for the first time in a while. And you’ve got to see the toilets to understand why they’re famous. 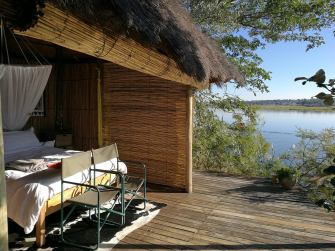 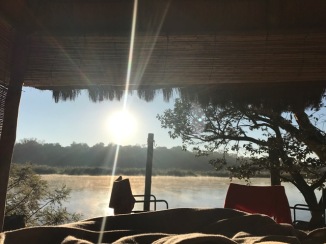 Waking up to the sunrise.

Playing cards.  It was actually pretty cold at night and this night we decided to have a fire and make our own food in a poitje.

While there we took a quick drive to Bwabwata National Park’s Buffalo area (just across the river from Ngepi but it’s a 30km drive up and around over the only bridge) for an afternoon and saw some leisurely game along the river including our first sable antelope and a massive herd of buffalo. Throw in the requisite elephants, hippos, giraffe and kudu and it was a lovely little afternoon of game viewing.

After two nights in our luxurious digs we moved on and decided to try out the Nkasa Rupara National Park as a tune-up for our trip into Chobe National Park (back in Botswana) in the coming days. We luckily sorted out a place to stay in one of the three options by the gate. We were a bit nervous when the community camp was full the next camp we stopped at didn’t offer “camping” just glamping in luxury safari tents way out of our price range. Luckily Livingstone’s Camp had a campsite available so we booked in for the most expensive campsite we had yet stayed at and went into the park. (Though it was expensive the campsites were really nice with private bathrooms and kitchen so probably worth it if that is very important to you and you see it during the day time.)

The park itself is on the smaller side but quite interesting as they have a lot of game concentrated in their smaller area. There is a lot of work being done on the park as it’s a bit behind the times in terms of signage and development but it is a nice place that I would definitely return to if I found myself in the Zambezi strip with an extra day or two on my hands. (Though this time I might reserve a campsite at the community camp ground to avoid the high prices.)

For the last few days we’d been noticing that our rear shocks were getting worse and worse (and the bed of our truck was definitely lower then when we set out) so we decided to jet off early the next morning to stop in Katima Malilo and have it checked out. Unfortunately our rear springs and bushes took a beating along the way in Namibia and gave out. Our passenger side is sitting directly on the chassis while the driver side is completely overloaded and also needs replacing. Of course, the parts which we need to replace them are at least 2 days away back in Swakopmund. Luckily we were able to make a plan with Steve’s (the local garage run by a South African expat) and the local Midas/Cymot franchise to get the springs and bushes ordered and delivered over the next few days.

If everything goes according to plan (and that is a BIG if) the parts should be delivered sometime on Friday afternoon to the Midas. Instead of going straight into Zambia from Botswana after our six nights in Chobe, Cheryl and I will now cross the boarder back into Namibia on Monday morning, pick up the parts from the Midas and take them to Steve’s where Fiona will be fixed up over the next 3 – 4 hours. And if everything REALLY goes according to plan, Cheryl and I will use that time to do our food shopping in preparation for the next 10 days with my folks while that is happening.

Supposing this is all completed by around noon we will then dash off north into our third country for the day and make the long drive to Lusaka to meet Mom and Dad at the Air BnB we’ve arranged for the night, 20kms from the Lusaka Airport. Oh, part of the plan is also for my parents to be picked up at the airport by a local driver since we won’t get there in time any more. Lots of planning. We may have to be flexible but I’m sure we’ll make it work. Somehow.