Seeing wild dogs in the bush always gives me a sense of joy. They are so playful, yet so lethal as a pack. On our fourth day in Mana Pools we came across a pack of 17 wild dog running alongside the road. Another car had already been following them for a few kilometres. There were on a hunt.

Getting tired they laid down to rest shortly after we started following them. We weren’t to be lucky enough to see them finish the hunt.

After sitting and watching for 15 minutes or so and having a nice bowl of cereal we decided to take advantage of one of the rules that makes Mana Pools unique in the safari area world. We decided to walk up for a closer view…

Mana is the only park I know of where you are allowed (encouraged even) to get out of your vehicle and go for unguided walks into the bush. So far we had stayed relatively close to our vehicle to check on paths through the mud (more on the mud later) or to stand and view some lions in the distance. Since we were with another couple from Zimbabwe who assured us it was safe we ventured with them on foot around 50 meters from the Hilux. The dogs could not have been less concerned about us. 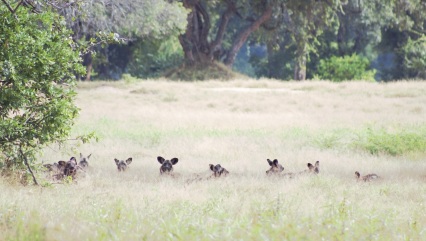 A closer view once they laid down 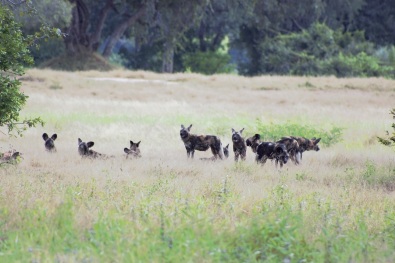 Later we actually moved around to the side further from the vehicle to get a better look. To be clear though, we were in an open area where we could see for quite a long distance in any direction (except for right around where the dogs were of course. There, bushes and trees were obstructing our view, hence the need to walk). We were safe. Plus, what’s the difference of walking around there vs. in our unfenced camp where an elephant had come within 5 meters of us the night before anyway?

It’s an awesome feeling to be out in nature like that. And a wonderful way to spend an hour just observing a really cool animal which is sadly endangered.

On our drive out of the park a few days later we saw the same pack playing, this time right on the side of the road (some even used our car as shade for a few moments.) This time we didn’t get out but got to see them much more active as they jumped and played with each other. 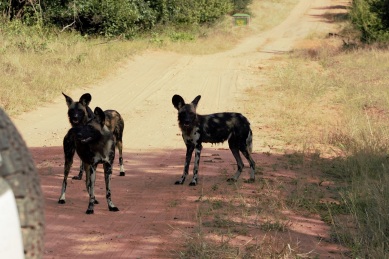 Taking a rest from playing in the shade behind our car 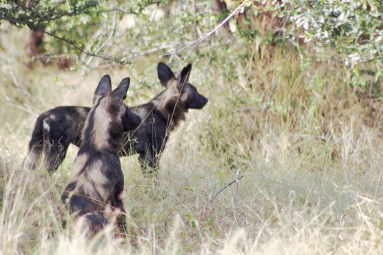 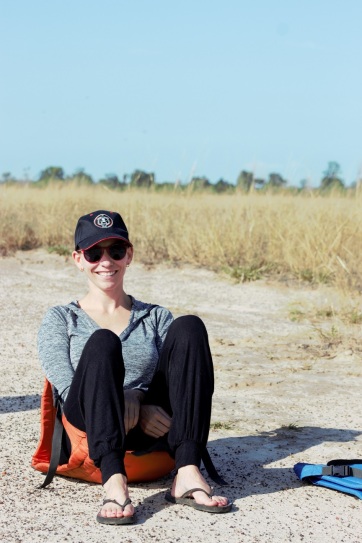