I’ve already told you about the lions and the elephants in our camp. Incredible. We saw more lions again (this time just 4 of them, 2 male and 2 female) as we were getting ready for a morning game drive two days later. They were casually trotting through the camp site right next to the bathrooms and off into the bush (this site had bathrooms, the next place we went for 4 nights did not.) Naturally we got ready as fast as we could and followed them (after deciding to drive the 70 meters to the bathroom instead of walk like we usually do…)

That night in the camp we saw a couple of hyena lurking in the shadows. They always look so mischievous. I think they look like little boys who were caught with their hand in the cookie jar. None tried to steal our braai meat though as we had been warned they might. That’s when it helps to have a 6’7” German at your camp. Even Hyenas won’t mess with him and his braai meat.

When we moved to the remote camp site the sightings continued. We had elephants next to our camp almost every evening and on one occasions two of them came with a couple of meters. The red spotlight again proved to be a great asset to light them up enough for some night photography without scaring them away.  Michael and Lisa referred to this as the animals hanging out in the “Red Light District” of Mana.

An elephant passed right next to our camp to drink some water. 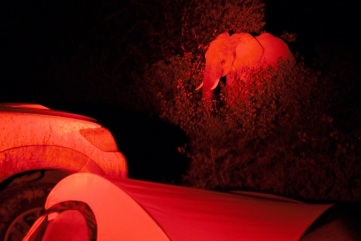 We took down our washing as soon as they left…

Throughout our time at that camp we saw hippos, hippos and more hippos. We were right on the banks of the Zambezi with multiple pods of hippo all around us. We could hear them all day and we often saw them walking past our camp at night. We made sure not to set up our tents in any of their paths to the water. Hippos are the most lethal (to humans) animals in Africa and its mostly because people get between them and water. We didn’t want to test that statistic.

The last night we were there Cheryl and I were still packing and organizing our things while Michael and Lisa had started on dinner. They called to us to come quickly because hippos were getting out of the water. “Big deal,” we thought, “we’ve seen those many times over the past few days, let’s just finish packing.” After insisting we begrudgingly went over to them to be surprised with the tiniest baby hippo we had ever seen. It must have just been born. It definitely won the prize for cutest hippo in Mana Pools.

Sadly most of the photos of these animals didn’t really turn out because it was night time and they wouldn’t stay still for the long shutter speed. The stories will just have to live in our memories.